A good thought to start the week. What beautiful things do you appreciate in your life? I stumbled upon this quote while I was looking for quotes for work. In light of events from the past few weeks, this quote is especially timely.

Whenever someone passes, people begin sharing stories about the person—funny and touching anecdotes that offer a glimpse into the person’s character. This stroll down memory lane offers solace while helping us to honor the memory of the deceased. I remember my cheeks hurting from laughing so hard listening to the stories at my grandfather’s funeral. It made the mourning process easier to know that he truly lived a life full of humor and generosity, and it gave me insight into where my stubborn streak came from.

While many people go through live aspiring to have an abundance of material items, others live their lives inspiring others to be better, do more and impact the world around them. The best gauge of the quality of your life is seen in the lives of those you’ve impacted or inspired. The spirit of your life lives on in the actions of the people whose lives are better because you lived. That’s why I love this quote—it cuts through the b.s. to focus on what’s really important.

Maybe not all happiness, but it does bring a smile to the face.

Bikes and gardens–two of my favorite things.

They don’t call it “California’s Toughest Century” for nothing. While the hills along the Tour of the Unknown Coast are intimidating, the real kicker is the weather.

Completing the Tour of the Unknown Coast has been a goal of mine for the last few years. However, I wasn’t able to do it until this year, and even then, I only completed the 62 mile metric century. The giant hill, dubbed “The Wall” at about mile 90 doesn’t suffer fools, and since I didn’t really train for the event, I figured it would be smarter to know my limits. Needless to say, it was still a challenge. Here are three things I learned.

1. Look for the positive. When I was driving to the event, I saw a rainbow in the distance over the course. It improved my mood and made me eager to ride, despite the fact that it was pissing with rain for most of the morning.

2. Train, even if you know you can do it. Completing my first century last year made me a bit cocky. I figured, well of course I can do 62 miles; piece of cake! Not so much. It was tough, and not just because I was cold, wet and couldn’t feel my appendages. I wasn’t really prepared for the hills as much as I could have been if I had trained for hills. And, by the end, my butt was sore and I was ready for it to be over.

3. You can’t prepare for it all. When I packed my bag the night before, I included several tubes and CO2 cartridges. I was long overdue for a flat tire, not having had one in my last few rides. However, I didn’t bring extra layers of clothing. The days leading up to the event were relatively warm and I thought, what do I need extra layers and long pants for? Well, the tubes came in handy for my 3—yes, 3—flat tires, but I spent the first half of the ride mouth chattering cold and miserable. Then I spent the second half in soggy clothes and socks.

4. Sometimes the ruts sneak up on you. My second and third flat tires came at the same time, when I was speeding downhill. I hit a rut in the road that was lurking in the shadow of a tree. I didn’t see it, but I felt it when I hit it and then landed on my rims. Not fun, but I’m really lucky that I was able to keep it upright, especially considering a fall would have meant a fall down a fern and stump covered cliff.

5. Get by with the help of friends. I was lucky to ride with a woman who I had met a few months back. She encouraged me to keep going. Honestly, if I had to deal with three flats by myself, I would’ve quit. But she helped me with my flat tires, encouraged me to smile when we saw the photographers and made the ride an enjoyable experience. 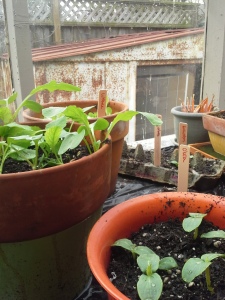 We’re closing on our house in less than a month, which means that I finally get a garden of my own—one that’s in the ground instead of in pots that can move with me. I have the patch of lawn all picked out in the protected courtyard next to the greenhouse. And, feeling inspired by the organic gardening class I finished a few weeks ago, I’ve designed the vegetable garden, the strawberry garden and made preliminary plans for the landscaping in the front. The latter I’ve planned and erased several times, and will probably plan and erase another ten times before I even break ground.

Planting a garden from scratch is going to be a learning process. While I helped my parents with our gardens growing up, I never helped with the initial digging and labor. So far, I’ve learned a lot.

Have a contingency plan. The carrots that I started from seed in the greenhouse haven’t erupted from the soil yet. Now, it’s only April and I realize that it may take a while, but I’m planning to replace them with something else in the garden if they don’t sprout (most likely with some sort of lettuce. Lettuce grows quickly and seems to love me). That way, there’s always something in the soil that’s growing. And, if they do sprout up, then I can transplant them into a smaller patch than I had intended.

Plant what you love. Two years ago I planted zucchini, and thinking that it wouldn’t do well, I planted six plants. Well, it loved the San Diego sunshine so much that we were bombarded with more zucchini than we knew what to do with. We couldn’t give it away fast enough. I like zucchini, but not pounds and pounds of it. So, in the new garden, in our new home, I’m only planting two or three plants—enough for a stir fry or two and maybe some zucchini bread, but not enough to overwhelm us.

This time around, I’m planting the vegetables that we love and always buy in the grocery store every week. Lettuce and spinach do really well up here, and we’ll be able to grow them in the winter as well in the greenhouse. Add into the mix cucumbers, bok choi, tomatoes, garlic (lots and lots of garlic!), green beans, strawberries and a few other token things like habanero peppers and cantaloupe. Everything I’m growing I know we’ll eat. In fact, I just harvested some bok choi, lettuce and dill that I grew in the greenhouse and it was delicious.

Be flexible. Sometimes things won’t grow and sometimes your garden will be infested by vermin and bad bugs (like ants, my nemesis). That’s the way it goes. Deal with it and move on. Now this attitude may change when gophers circumvent the gopher wire and manage to decimate my spinach, leaving me to patrol my garden all night with a rifle in hand because our cat is lazy, but for now, I’m going to take the mellow approach. We’ll see how that goes.

This attitude also translates to the front garden. Right now, I want to plant a couple of cherry trees, lavender, lupine around the border, roses and rosemary. But, some of these might not work out, or I might think that wild lilac is the best thing ever and decide to plant it everywhere. What’s great about gardening is that most things can be transplanted elsewhere.