They don’t call it “California’s Toughest Century” for nothing. While the hills along the Tour of the Unknown Coast are intimidating, the real kicker is the weather. 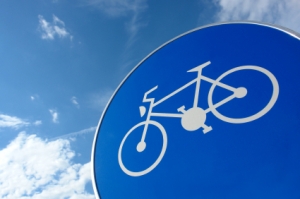 Completing the Tour of the Unknown Coast has been a goal of mine for the last few years. However, I wasn’t able to do it until this year, and even then, I only completed the 62 mile metric century. The giant hill, dubbed “The Wall” at about mile 90 doesn’t suffer fools, and since I didn’t really train for the event, I figured it would be smarter to know my limits. Needless to say, it was still a challenge. Here are three things I learned.

1. Look for the positive. When I was driving to the event, I saw a rainbow in the distance over the course. It improved my mood and made me eager to ride, despite the fact that it was pissing with rain for most of the morning.

2. Train, even if you know you can do it. Completing my first century last year made me a bit cocky. I figured, well of course I can do 62 miles; piece of cake! Not so much. It was tough, and not just because I was cold, wet and couldn’t feel my appendages. I wasn’t really prepared for the hills as much as I could have been if I had trained for hills. And, by the end, my butt was sore and I was ready for it to be over.

3. You can’t prepare for it all. When I packed my bag the night before, I included several tubes and CO2 cartridges. I was long overdue for a flat tire, not having had one in my last few rides. However, I didn’t bring extra layers of clothing. The days leading up to the event were relatively warm and I thought, what do I need extra layers and long pants for? Well, the tubes came in handy for my 3—yes, 3—flat tires, but I spent the first half of the ride mouth chattering cold and miserable. Then I spent the second half in soggy clothes and socks.

4. Sometimes the ruts sneak up on you. My second and third flat tires came at the same time, when I was speeding downhill. I hit a rut in the road that was lurking in the shadow of a tree. I didn’t see it, but I felt it when I hit it and then landed on my rims. Not fun, but I’m really lucky that I was able to keep it upright, especially considering a fall would have meant a fall down a fern and stump covered cliff.

5. Get by with the help of friends. I was lucky to ride with a woman who I had met a few months back. She encouraged me to keep going. Honestly, if I had to deal with three flats by myself, I would’ve quit. But she helped me with my flat tires, encouraged me to smile when we saw the photographers and made the ride an enjoyable experience.